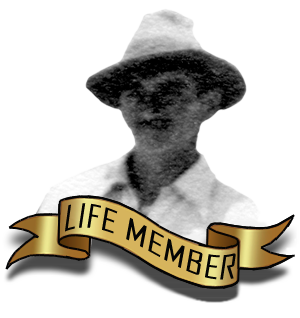 A Former Life Member Now Deceased *
H Fairfax (Bert) Johnson was one of the group of founders of the Game Fishing Club. Bert got to know Jack Lord Arthur at Rapid Bay and this was where he was approached by Jack in regards to forming a fishing club. Bert was all ears, as he knew the waters around Rapid Bay and fishing was good, but not fully explored.
At the time, Bert was building a shack with his brother-in-law, Jack Peek, at Rapid Bay and it was not long before Bert convinced Jack Lord Arthur to build a shack right next door and they became good friends.
It was soon after this that Les Hanann, Jim Veitch, Cliff Nortan, Jim Oswald and Alf Dalwood joined Jack and Bert to call a meeting, which was held at the Rowing Club Boat Shed on the Torrens on the 1st September 1937.
At this meeting they decided on a name for the new Club they would be forming and called it “The Game Fishing Association”. ( “but later changed it” )
Bert wrote an article in the Sunday Mail on the 4th of September 1937 under the   headline “Game Fishing in South Australia” and about the possibility of big game fish in our waters and a lot of interest from keen fishermen erupted. On the 16th September 1937, at the second meeting of the newly formed Club, they changed the name to  —  “The Game Fishing Club of South Australia”.
Bert’s first  position in the newly formed Club was  Secretary.
The first President was Mr. Frank Morehouse and Jack Lord Arthur was appointed the Chairman.
Bert fished Rapid Bay and the Kangaroo Island area in 1938 and caught a number of cocktail sharks and a large fish they called Black fin tuna weighing up to 30lb. These would be later renamed as the Southern Blue fin Tuna that we know today.

In 1939 Bert represented the Club as our delegate at the annual conference, which was held in Melbourne, Victoria. On the 24th July 1939, fellow Club member Jack Lord  Arthur joined Bert on this conference.

In late 1941, Bert resigned from the Committee for a short time before returning after the War, but obviously stayed a member.

He was honored with Life Membership on the 27th of September 1941. When he came back after the War, he became our Club President after Jim Cowell.  Bert was   President from 1948-1949.

After reading the minutes, I can see Bert’s name up to the late 1950s, but he was     obviously not very active in the later years. (Bert) Fairfax Johnson sadly passed away in September 1959.

In Memory of  Fairfax (Bert) Johnson